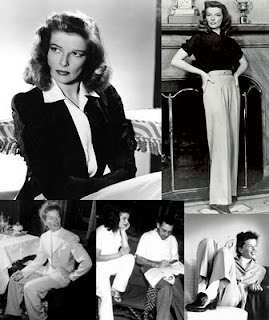 When we think of 1930's and 1940's fashion we think of long dresses, siren suits and corsets that made you unable to eat another piece of cake, thank god we don't have to deal with that situation anymore. Katharine Hepburn did not conform to the prim style of the time, with her high-waisted pants and button-down shirts she was an early style icon of androgynous fashion. Now her fabulous style is being celebrated in an exhibition in New York called Katharine Hepburn: Dressed for Stage and Screen.


Katharine is a Hollywood legend and is famous for films including 'Guess Who's Coming to Dinner' and 'The Philadelphia Story'. Her career spanned sixty years on stage, screen and television and she was known for her independence playing characters that were often strong and sophisticated women. She died in 2003 at the ripe old age of 96 and had saved almost all of the costumes from her films, including 'The African Queen' and 'On Golden Pond'. The display at the New York Public Library for the Performing Arts which runs till the 12th January, contains some fabulous looks, including her personal collection of seven khaki pants arranged on mannequin legs. Katharine famously once said: 'Anytime I hear a man say he prefers a woman in a skirt, I say, try one, try a skirt.' You go girl, I totally agree with you, although the thought of Mr. Boyfriend in a skirt is just a tad disturbing.

Her originality in wearing what was different to the norm influenced American women and showed them that you don't have to wear a girdle, stockings and a tight dress. You can actually be comfortable, thank god for her otherwise we'd all have to say bye bye to our hoodies and onesies.

She worked closely with all her designers to help create her performing wardrobe. If she really liked the costume she would have copies made for herself, sometimes in different colours or fabrics. She had a silk dress and coat made by Norman Hartnell from 'Suddenly, Last Summer' copied and a green raw silk jumpsuit by Valentina from 'The Philadelphia Story'. Katharine shopped at the major cutting-edge New York couturiers and worked with the best costume shops of the time, including Muriel King and Valentina. She really appreciated quality fabric and good construction and even her trousers were couture. No Primark for this lady.

The exhibition contains 700 gems from her estate including a gorgeous stunning satin and lace wedding gown created by Howard Greer for her role as Stella Surrege in The Lake. One of my favourites of the collection is a beautiful gown made by Muriel King from the 1937 RKO movie Stage Door, which is feminine yet comfy and I'm sure showed of Katharine's twenty inch waist amazingly. Yes ladies, she did have a twenty inch waist, but remember Fox's biscuits weren't around then, or Domino's.

The main thing she cared about was being comfortable and always wore her signature look made up of khaki's and a shirt to rehearsals and publicity appearances. Katharine did cause some controversy  amongst RKO executives, who once hid her trousers in an effort to persuade her to abandon them. In retaliation she threatened to walk around the lot naked, well to be honest if I had a twenty inch waist I would find any excuse to show it off, wouldn't you? In the end she only stripped down as far as her silk underwear before stepping out of her dressing room, but she made her point and got her trousers back. 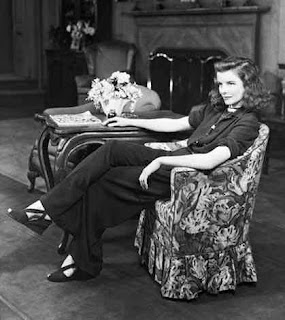 The exhibition also contains film clips, movie posters and archival photographs of the lovely lady wearing her beautiful outfits. False eyelashes, make up trays and her sensible shoes are also on display. If you are unable to go to the exhibition like me (sadly I just can't afford the plane fare, especially after my recent Asos spree) you can drool over her style by reading the book that has been launched to accompany the exhibition. Katharine Hepburn: Rebel Chic can be found here on Amazon.co.uk or for all you lovelies across the pond here at Amazon.com. I suggest you all indulge or at least put it on your list to Father Christmas, it's never too early.

Katharine was a true style icon and showed that you don't have to follow the crowd, you can wear what you want and be comfortable in doing so. So I'm taking inspiration from her today, monkey pyjamas and fluffy slippers it is then.

Scribbled with love by Second Hand Rose at 14:23